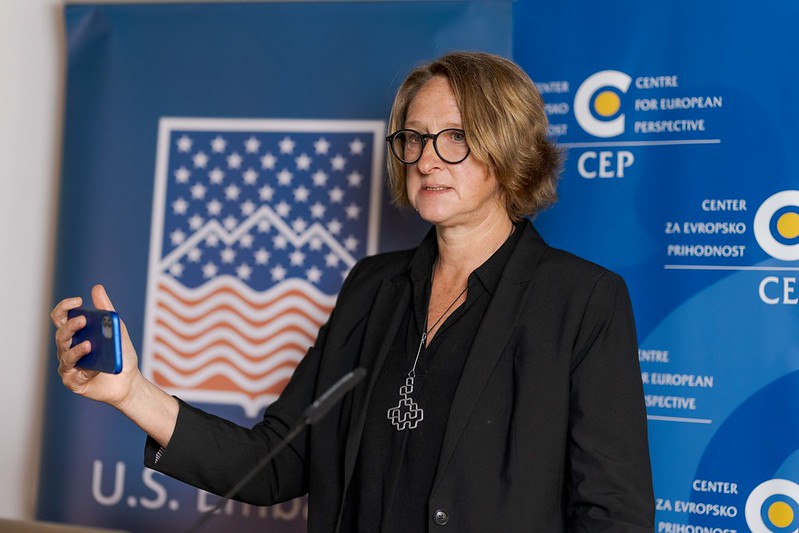 The digitalisation of diplomacy has been constantly shaped by offline events. From remote working to diplomacy, banking, and online retail, the pandemic has compressed a year’s worth of transformation into months, bringing with it a dramatic shake-up in how people live, where they work, and how they socialise, and in how governments communicate to each other and with their public. We have witnessed diplomats adopting Zoom and Webex technologies, dropping their risk-averse costumes and adopting increasingly informal ways of communication on social media.

“Recent data show that we have vaulted five years forward in consumer and business digital adoption in a matter of around eight weeks,” declared the McKinsey consultancy in May 2020. The European Commission has recently announced that it intended to close a half of its buildings, as telework was becoming the “new norm”. “We made surveys, and more than 90 percent of our staff is very much in favour of having two to three days per week of teleworking,” said European Commissioner Hahn, pointing out that “our office surfaces will be adapted to the generalized use of teleworking”.

In 2020 and in the first half of 2021, we have been propelled into the future. However, it will take some time to realise how much our lives have permanently changed. What digital technologies, leveraged during the COVID-19 pandemic, will remain integral to diplomacy once the pandemic has ended? The first technology to outlive COVID‑19 is most probably videoconferencing. It saves time and resources, and is eco-friendlier.

Similar to all other government institutions, the Slovenian Foreign Ministry has been thrown into the new reality. The absence of physical diplomacy and the need to mount global consular operations forced us to adopt the innovative approach of using social media to inform our citizens about the possibilities of returning home at the time when the borders were closed.

Twitter was most widely used to inform the public about the situation in Slovenia, applicable border regimes, and travel assistance. Facebook was used to publish human-interest stories as well as present behind-the-curtain diplomacy by posting ambassadors’ diaries about the life in foreign capitals and embassies’ daily routines during the pandemic. Instagram was used to promote social distancing and measures taken to curb the spread of the virus. By definition, embassies adopted a more relaxed approach to communication on social media and demonstrated great creativity when posting information about travel arrangements and various success stories. I was impressed by how quickly the risk-averse culture was let go. At least for the time being.

Any future pandemic is likely to be characterised by the need to mount global consular rescue efforts. During the pandemic, as described in Mykolas Mazolevskis’ blog, the Lithuanian MFA designed its own consular chatbot to answer general questions, ranging from organising emergency charter flights to listing travel warnings. It has acted as a great innovation, reducing the strain on consular departments, and as a valuable tool for smaller diplomatic networks. The Slovenian MFA is planning to upgrade its existing digitalised and personalised approach to informing the public about consular services and to adopt best practices, similar to Lithuania’s concept. During Slovenia’s presidency of the Council of the EU, we also plan to promote »team Europe« and to push for a better-coordinated approach, in cooperation with other EU countries, to informing the public during our consular rescue efforts.

Almost spontaneously, the Slovenian MFA set up a new system of internal communication by creating a WhatsApp group and a separate email group for ambassadors. Emails are still a frequent means of communication and used mostly by diplomats belonging to the generation X. We set up an email group to inform each other about new developments when most of us worked from home and to restore the collective spirit at the time of social distancing. It was a time of great solidarity, but also a time of anxiety and isolation. Canadian Ambassador Barbara Richardson nicely explained the situation in a tweet of 22 March 2020: “Diplomats around the world remain in place, far from family and friends. There to help their nationals in trouble. There to ensure supply lines, connect countries. They are in dangerous places. If they get sick, they will not be home. They remain for their country. #foreignservice”

In the future, it could be challenging to maintain the corporate culture, to keep employees close to each other and the base, and to develop a teleworking team spirit. This goes not only for the MFA, where we have long experience in long‑distance cooperation, but also for other government agencies and businesses.

During the COVID-19 pandemic, the Slovenian MFA used videoconferencing to hold lectures and workshops at the Diplomatic Academy, which opened its digital doors for the first time in September 2020. The period in which people spent more time at home was also used to improve diplomatic training. We drew up an ambitious programme, which was well-received among colleagues. One of the most ambitious and appreciated event was a workshop on digital diplomacy, co‑organised by the Centre for European Perspective, the US Embassy in Ljubljana, and the European Digital Diplomacy Network.

From its very beginning, the Diplomatic Academy was indeed a virtual diplomatic academy. All programmes were conducted via Webex. We adopted new skills, such as creating newsletters via MailChimp to inform our colleagues about trainings, workshops, and seminars organised ahead of Slovenia’s takeover of the presidency of the Council of the EU. I believe that Webex will remain an essential tool for diplomatic trainings in the future.

One of the priorities that Slovenia has put forward together with Germany and Portugal, the other two members of the EU Council presidency trio, is to better protect our societies from malicious cyber activities, hybrid threats, and disinformation. According to a recent poll, 83% of Europeans believe that disinformation threatens democracy. “Disinformation cannot remain a source of revenue. We need to see stronger commitments by online platforms, the entire advertising ecosystem, and networks of fact-checkers,” said European Commissioner Thierry Breton at the presentation of the Guidance to Strengthen Code of Practice on Disinformation in May. Based on a robust monitoring framework and clear performance indicators, signatories of the Guidance, such as Facebook, Google, Twitter, TikTok, and Microsoft, should reduce their financial incentives to disseminate disinformation and encourage users to take an active role in preventing its spread. We believe that this is an important step forward in the fight against disinformation. Slovenia intends to work together with its EU partners to tackle disinformation and strive for even closer cooperation with fact-checkers across the EU Member States and in their respective languages.

The exchange of best practices in the fight against disinformation and measures taken to curb it, as presented by Ilija Zhupanoski in his blog, are extremely valuable and timely—not only for digital practitioners within the EDDE group, but also for colleagues in the EU, NATO, and other like-minded countries.