The First EDDE Steering Board Meeting Took Off in Brussels

The First EDDE Steering Board Meeting Took Off in Brussels

The first meeting of the European Digital Diplomacy Exchange (EDDE) project Steering Board took place in Brussels from 15 – 17 April 2019 in order to set the operational ground for the Steering Board, as well as to build the linkages and plans necessary to increase EU and NATO involvement.

Centre for European Perspective (CEP), together with U.S. Department of State continues to encourage intergovernmental network of government communicators that was formed within the project “Enhancing Digital Diplomacy Activities in Western Balkan and Eastern European Countries.” In order to ensure that digital development takes root locally in between program activities we established a Steering Board, consisting of representatives of the countries that are involved in the project, coming from the Western Balkans, Eastern Europe and the Baltc States.

The meeting gathered fourteen out of fifteen representatives in the Steering Board, chaired by Matt Jacobs from the U.S. Department of State and Ingrid Omahna from CEP. Besides numerous discussions about how to shape a system that can ultimately continue to develop and refine the work moving forward in a meaningful manner, this meeting was also the opportunity to meet with other partners. Rebecca Obstler, Principal Editor of NATO Communications Services at Public Diplomacy Division presented a NATO approach towards promoting the coherence among Alliance communications in a way that can be mutually amplifying. Steering Board members also met with EEAS StratCom representatives. Jurgis Vilčinskas, Deputy Head of StratCom Division at EEAS outlined the structure of the EEAS, their set of objectives and their way towards detecting, predicting and exposing disinformation and their narratives. Atlantic Council’s Digital Forensic Research Lab Director, Graham Brookie provided an overview of how the Atlantic Council identifies, exposes, and explains disinformation where and when it occurs using open source research.

At the end, the meeting ideas will manifest in a guiding document enshrined with guiding principles. 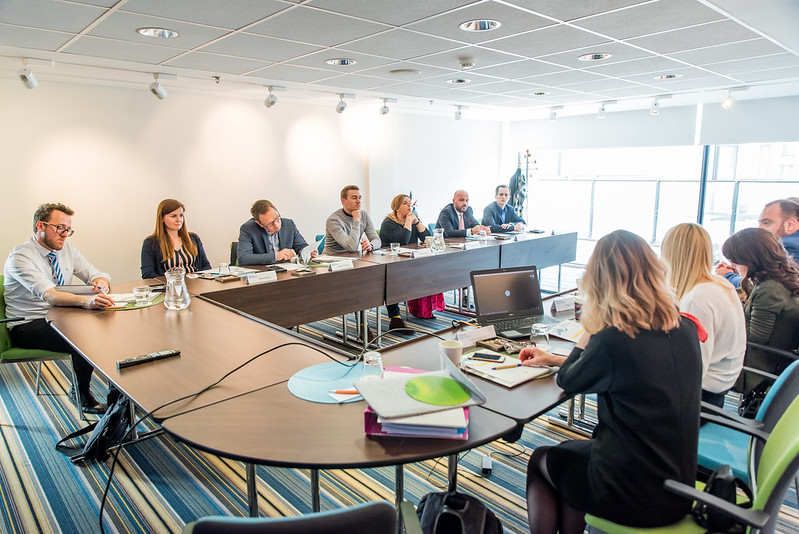